With everything going on we have heard the term “recession” get thrown around a lot over the past couple of months.  So, what exactly is a recession and how do we determine if we are in one?  Historically, the definition of a recession was two consecutive quarters of decline in real GDP figures.  Even though this seems to be a foregone conclusion of occurring in 2020, the definition seems to be changing.  The National Bureau of Economic Research, which officially declares recessions now defines it as a significant decline in economic activity spread across the economy, lasting more than a few months, normally visible in real GDP, real income, employment, industrial production, and wholesale-retail sales. Regardless of the definition, there are some historical facts that can be helpful to know about recessions and how we normally come out of them.

Recessions tend to be short, and Expansions Powerful

Let’s start with some very good news….recessions tend to be painful but relatively short lived.  On the other hand, expansions tend to last 6 times longer than recessions and create significantly more jobs.  Since 1950 recessions have ranged anywhere from 8 to 18 months with the average being somewhere around 11 months. For people who have lost their jobs or have seen their investment accounts nosedive, that 11 months can feel like an eternity.  While we can’t minimize that feeling, it is also important to note that investors with a long-term outlook tend to stay the course and participate in the aggressive growth that follows. 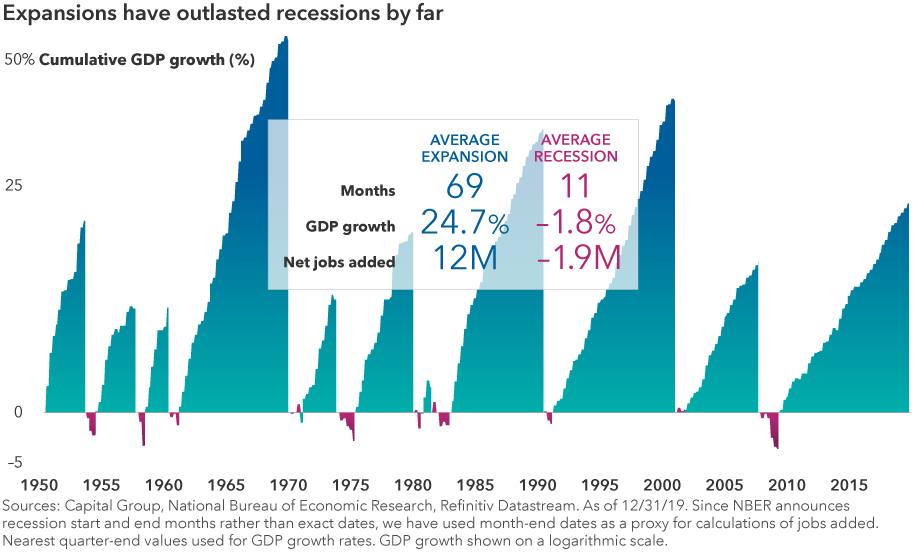 The Consumer Leads the Way

Individuals like you and me are what tend to lead the way out of difficult economic times.  In the U.S., the consumer accounts for approximately two thirds of the overall economy.  With millions of Americans already on unemployment and seemingly millions more joining them every week, it is easy to understand why purchasing activity has dropped off.  While government support and stimulus is trying to curb this issue, low employment is likely to keep consumers in a frugal state of mind.  On the other hand, once individuals start to spend more freely it has historically been the catalyst that leads the way out of recessions.

Timing may not be Everything

For individuals lucky enough to have cash reserves or even the stomach to jump back into the market, waiting for the “all-clear” can lead to missing out on gains.  Since World War II, in recessions that have a corresponding equity correction, the S&P 500 has bottomed 3 months before the end of each recessionary period.  Certainly, the month of April has been an interesting phenomenon that further proves this point.  During March, the S&P 500 lost -12.35% and then gained +12.82% in April.  Will the market keep going higher from here, or crash again?  The reality is that nobody actually knows.   Since we don’t know the timing of this, buying back into the market over time tends to provider lower risk with consistent returns.