“Investment Themes for the Next Decade”

Let’s face it, 2020 has been a difficult year for so many.  Whether it was the Australian wildfires, the killer hornets, the California fires, or the COVID pandemic, we have had our fair share of tumultuous events.  From week to week and month to month these events have weaved their way into our everyday lives and ultimately the financial markets.  With these events and an election coming up, I am sure we will continue to see short term volatility in the markets, but what is the long-term outlook for the 2020’s?  It’s easy to get caught up in the short-term and forget the bigger picture or our long-term goals.   What are some themes that we see being true as we look out over the next decade?  As Microsoft founder Bill Gates famously said, “We always overestimate the change that will occur in the next two years and underestimate the change that will occur in the next 10.”   The Big Will Get Bigger 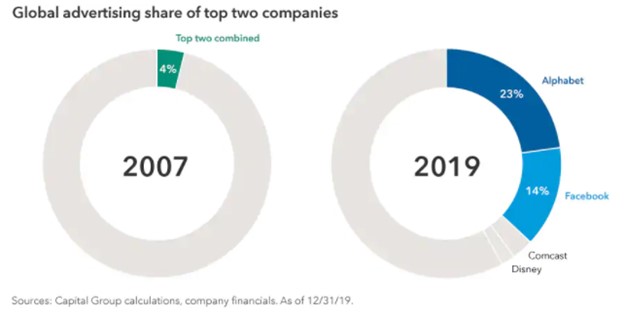 When it comes to market share in the digital era, size matters. It’s a theme affecting many industries but is perhaps most obvious in online advertising where Google (Alphabet) and Facebook control 37% of the market. This is in sharp contrast to the fragmented days of 2007, when the top two competitors combined for just 4%. “Because of their size, they are driving the best returns for advertisers. They are growing by driving more usage and showing more relevant ads — not by raising prices,” says equity analyst Brad Barrett, who has been covering media and internet companies for 19 years.   High barriers to entry and scale advantages that favor global instead of regional players are two reasons this trend could continue well into the next decade. “There is also now a very tight feedback loop related to a company’s service quality and the scale of its business,” explains Barrett, who believes network effects can be extremely powerful. Consumers tend to prefer social media sites that already have a large and growing user base. Search engines provide better results when more people use them. And the bigger a streaming platform gets, the more it can reinvest in content, which could help lower costs and attract even more users.     Innovation Will Emerge from Emerging Markets   If you think the most innovative companies are in the U.S., think again. When it comes to innovation, large U.S. tech companies certainly get most of the attention. But that conversation may shift toward what’s happening in China and other emerging markets, says portfolio manager Chris Thomsen, who is the principal investment officer of EuroPacific Growth Fund at the Capital Group and has covered international equities for 22 years.   “We’re likely going to see emerging markets companies move toward becoming true innovators,” says Thomsen. “We used to refer to companies like Alibaba as the ‘the Amazon of China’ or Baidu as the ‘Google of China’, but these companies have really developed and localized their technology, while accelerating their growth in ways different from the U.S.”   Thomsen also notes that successful new entrants may scale more quickly than older companies, likely long before they become household names outside of local markets. “Consider Pinduoduo, which is an e-commerce company in China that is less than 10 years old but has already surpassed a $100 billion market cap. Likewise, the $150 billion multi-service platform Meituan has over 450 million active users. There are going to be a lot more of these cropping up across industries.”     Health Care for the Home

Pharmaceutical companies have been in the spotlight as they race to develop treatments for COVID-19. But one of the biggest shakeups in the health care industry may be happening on a more personal level. Just a few months ago, the idea of meeting with a doctor through a laptop screen may have seemed impractical, impersonal, and ineffective. But after months of social distancing, many of us have had our first telehealth experience and realized it works.   Frank, who has covered the health care industry for 18 years, believes this could be a tipping point that leads to a vastly different landscape by 2030. “I believe the combination of telehealth, at-home diagnostics and medicine delivery will enable almost everything to become treatable from home. Personal devices will use this data to help us improve our health, while physical doctor visits may evolve to be only diagnostics and procedures. Wearable and implantable technologies will essentially become an extension of ourselves.”   AI could spark the next revolution   No need to fear the rise of the machines. Machine learning — which is a form of artificial intelligence (AI) in which computer algorithms improve themselves in real time by processing tons of data — is already all around us. “Machine learning is now core to the entire online ecosystem. It drives recommendation engines we see on platforms such as Facebook, Netflix and Amazon, which can influence much of our social and commerce experiences,” Barrett notes.   From speech recognition to fraud detection the applications are vast, and computers are getting smarter and more capable every day. “Because they can access enormous amounts of data, the algorithms and computing power are at a place where they can teach themselves in ways that were never possible,” Barrett explains. “I think image recognition is one area where computers have already surpassed humans.”     Autonomous Vehicles could Rule the Roads   AI is also driving advances in autonomous vehicles. And unlike most of us, Brad Barrett has already ridden in self-driving cars — and lived to tell the tale. “They’re incredibly precise. Their lane centering and turning is probably already better than ours,” Barrett states, based on his experience riding in autonomous vehicles from Google and Zoox, a startup that Amazon offered to purchase for $1.3 billion earlier this year.   The world could look vastly different if autonomous vehicles eat into the 15 trillion miles that are driven annually. “There are big implications for land use, energy consumption, real estate, the ways cities are designed — really for everything.”   A world where self-driving cars rule the roads sounds like science fiction today, but Barrett believes we’re closer than many may think. “The foundation is already there. There are no new technological breakthroughs that need to happen. Real people are already riding in these vehicles with no safety drivers,” Barrett concludes. “Ultimately, I think it’s going to be cheaper and safer, and you’re not going to have to pay attention to the road. That’s a pretty compelling value proposition.”   Imagining life in 2030 may seem like daydreaming, but the reality is that a decade away really isn’t that far off.  Additionally, looking at these trends, and maintaining a long-term time horizon for your investment goals and objectives is more valuable than ever given the short-term volatility we have already experienced in 2020.
Learn More