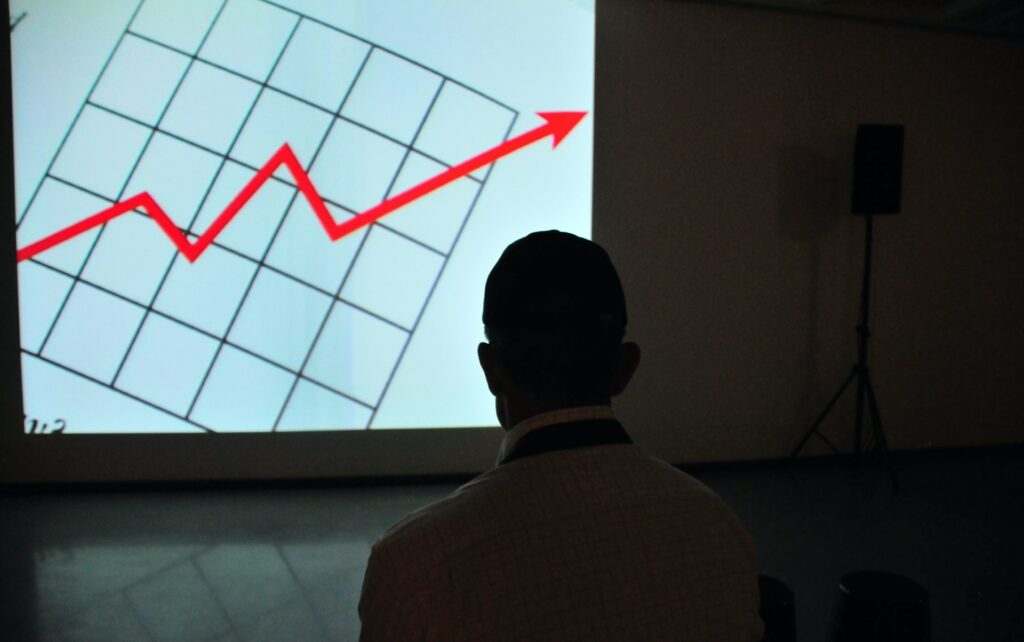 There is a lot of talk recently about inflation and what effect it will have on our purchasing power in the coming years.  I think it’s an important topic and one worth considering, but if we zoom out, what effect does inflation have over decades?   In a recent article by Nick Maggiulli at “Of Dollars and Data” he explores whether $1 Million is actually still worth $1 Million and also why we became so obsessed with that as a benchmark in the first place.  Enjoy!

In the year 2000 Americans found a new favorite gameshow—Who Wants to Be a Millionaire? With flashing lights, dramatic music, and memorable punchlines, the big money quiz show quickly took the nation by storm. Within a year it became one of the highest rated gameshows in American history, winning the Daytime Emmy for best gameshow in 2000 and 2001.

But Who Wants to Be a Millionaire? wasn’t just good television, it was also a statement about what it takes to succeed financially in American society—$1 million. Of course, you could live the American dream without having $1 million, but being a part of the two comma club made things a whole lot easier. Having $1 million was an undeniable signal that you had arrived.

However, the American obsession with millionaires didn’t start at the turn of the millennium but goes back over a century prior.

How Did we become so Obsessed with Millionaires?

If we look at Google’s NGram Viewer, which tracks the frequency of words in books since 1800, we can see that the term “millionaire” started getting very popular in 1880 before peaking in the early 1900s:

This was the famed Gilded Age during which wealth accumulation was at the highest it had ever been in the country’s history. With titans of industry such as John D. Rockefeller, Andrew Carnegie, and J.P. Morgan amassing riches at an unprecedented pace, the American millionaire was no longer a rare breed, but a cultural force. As Arthur T. Vanderbilt II stated in Fortune’s Children:

Before the Civil War, there were fewer than a dozen millionaires in the United States. In 1892, the New York Tribune published a list of 4,047 millionaires, over 100 of them having fortunes that exceeded $10 million.

Despite the increased number of millionaires, interest in this topic eventually faded, only to be renewed near the end of the 20th century. What caused this renewed interested in millionaires? There seems to be three key reasons:

The 1990s were a prosperous time for many Americans (even the U.S. government ran a budget surplus).

The Dot Com Bubble created overnight millionaires. This increased the focus on wealth within society.

If you take these points together, it creates the perfect storm for the resurgence of the American millionaire. And this resurgence shows up in other parts of American culture as well. 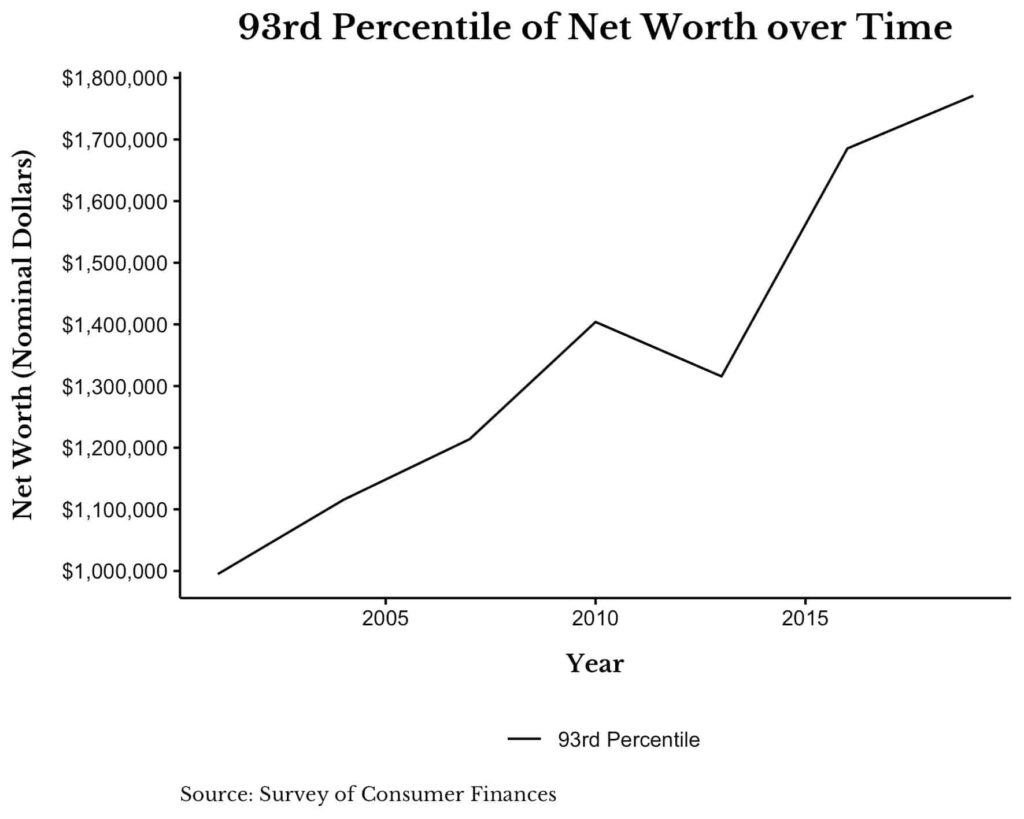 You can see this more clearly by looking at the change in U.S. home prices since the year 2000. Below I have plotted the change in overall U.S. home prices along with two metropolitan areas (Los Angeles, CA and Flint, MI), which more or less represent the higher and lower bound of home price changes in the U.S. over the past 20 years: 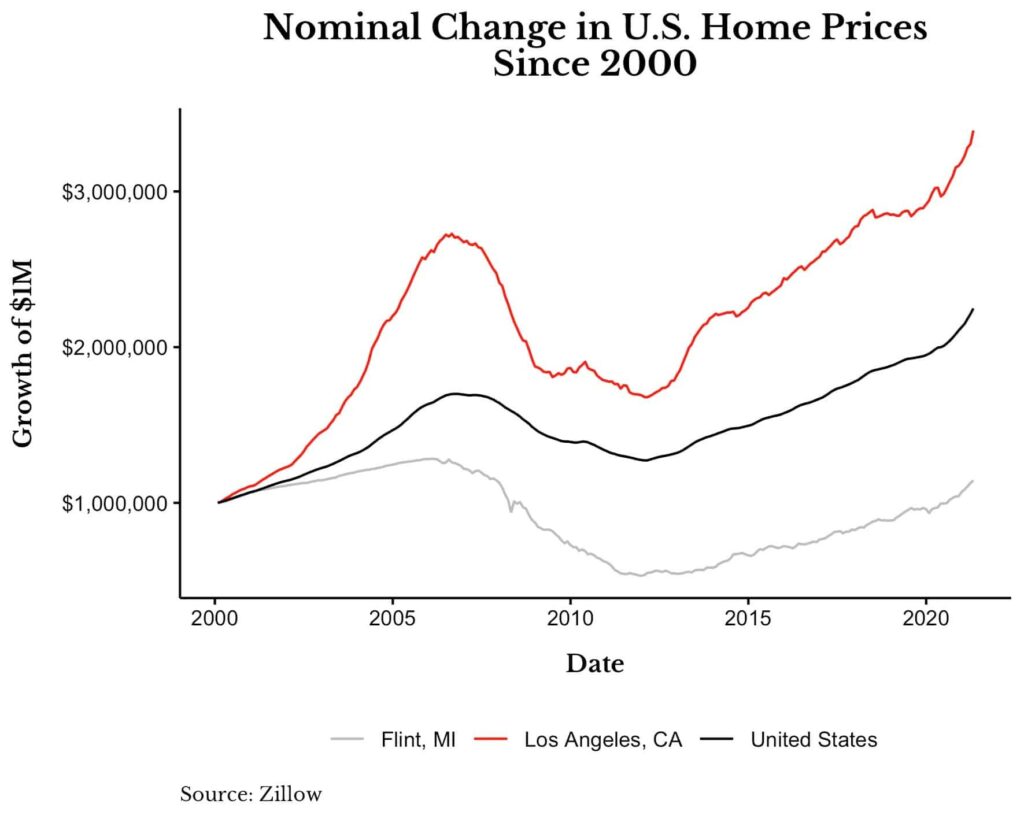 As you can see, U.S. home prices have roughly doubled over the last two decades. This means that what you could’ve bought for $1 million in 2001 would cost you nearly $2 million today. However, this is only on average. If you are in a big city like Los Angeles, home prices have more than tripled over this same time period. In other words, $2 million-$3 million is the new $1 million (depending on where you live).

Given this change over the last 20 years, it makes sense why meme stocks/crypto have become so popular. For some people, these investment options seem like the only real way to acquire wealth. But this idea isn’t necessarily new. As two researchers at the Cato Institute noted in February 2000:

A Consumer Federation of America/​Primerica poll in October 1999 showed that a majority of Americans think it is easier to get rich by winning a lottery or sweepstakes than by saving and investing modest sums of money.

I don’t blame these people though since wealth accumulation (and its corresponding prevalence in popular culture) only seems to be getting more extreme. You can see this most clearly by looking at the rise of the term “billionaire” alongside the term “millionaire” in Google’s Ngram Viewer: 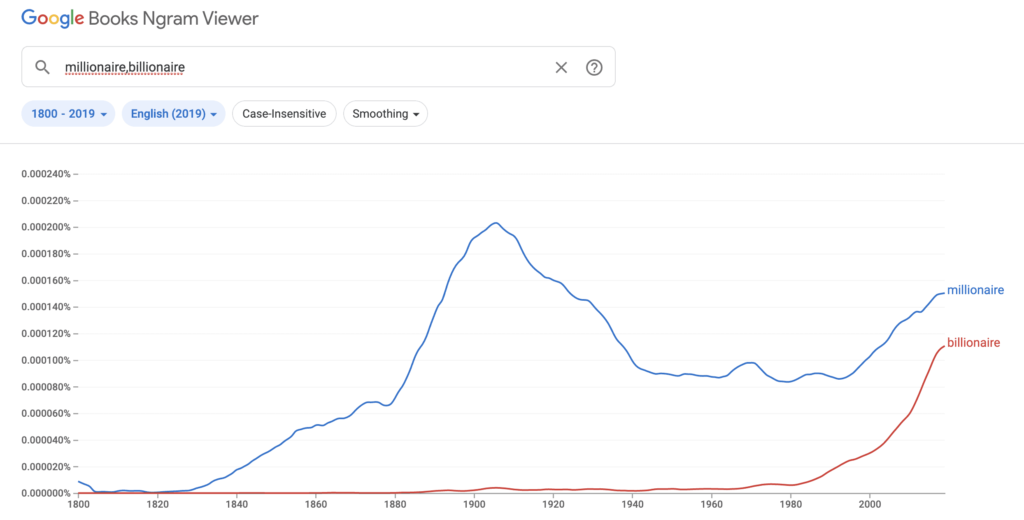 Jokes aside, though it might require $2 million (instead of $1 million) to live the millionaire lifestyle of today, my feeling is that most people seem to think that it requires far more.

One of my favorite datasets illustrating this comes from Kris Abdelmessih’s blog post What Does “Rich” Mean to You? In it he provides data from a Twitter survey where he asked for net worth, age, and what level of wealth someone needed to be considered rich. Based on 400 respondents, the data suggests two things. First, net worth tends to increase with age. Second, how much money someone has is positively correlated with how much they think someone needs to be considered rich.

For example, below is a plot of net worth by age among survey respondents. Note that I capped all net worth responses at $10 million to make these visuals more digestible:

As you can see, higher net worth tends to be concentrated among older individuals. In addition, the slope of the fit line is around $140,000, which suggests that you should be adding about $140,000 a year to your net worth each year after age 22. If you haven’t been able to do this, I wouldn’t worry though. This line is heavily skewed by selection bias, some fake data, and outliers. Remember, I didn’t make it to $500,000 by age 30 and this line doesn’t bother me in the slightest.

More importantly, the plot of what someone considers rich against net worth also has a positively sloped fit line, suggesting that richer people think you need even more money to be considered rich than relatively poorer people: 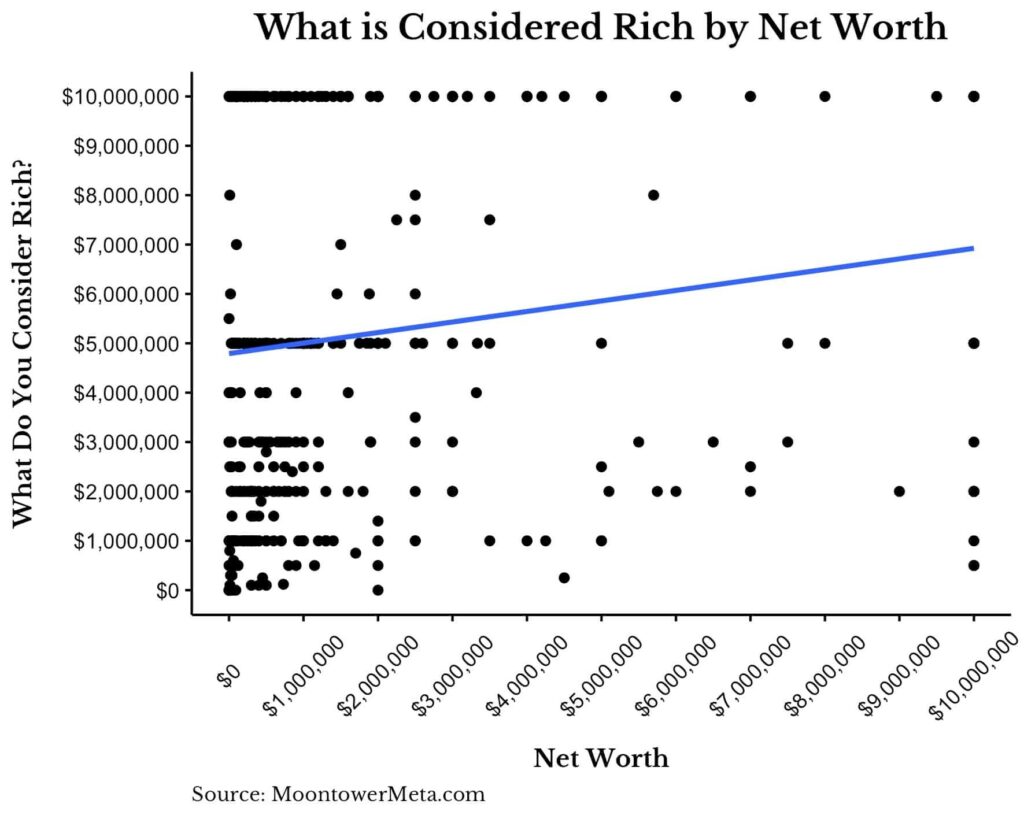 This plot is interesting because we can see the large mass of people that believe you need $5 million or $10 million (or more) to be considered rich. To provide some context, having a $5 million net worth in 2019 would have put you in the top 3% of U.S. households. My personal definition of rich is the top 10% of households ($1.2 million in 2019), but to each their own.

No matter how you define rich, seeing data like this is a reminder that opinions vary significantly on this subject. So is $1 million still worth $1 million? Definitely not. Final answer. But how much money you need to be happy is completely up to you. Thank you for reading!