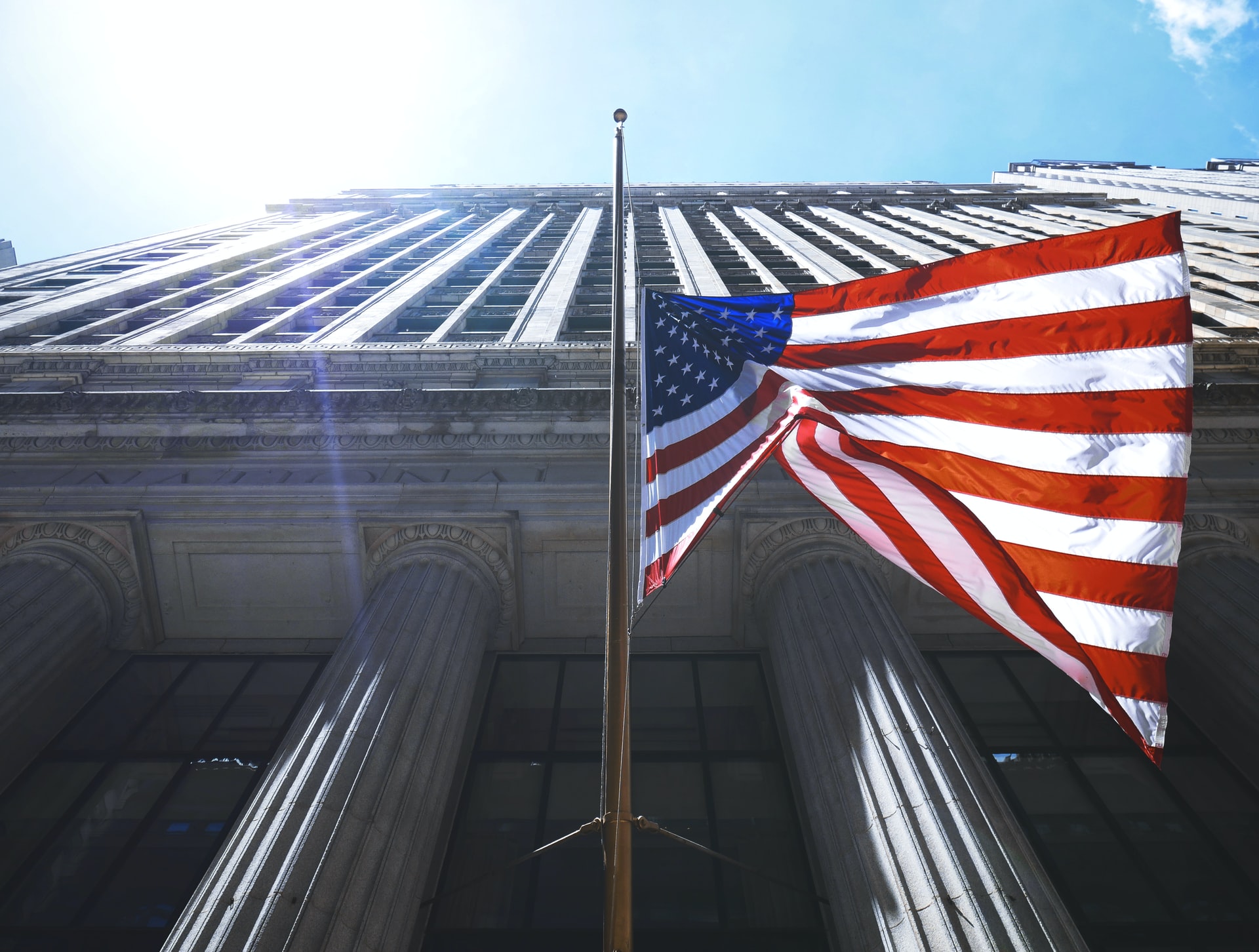 “Who Owns Stocks in the United States?”

I recently read an interesting article by Ben Carlson over at his blog “A Wealth of Common Sense”.  The article he wrote dives into who actually owns stocks in the United States and how that has changed over the past 20 years.  We might hear about wealth inequality in various forums or conversations, but I liked the statistics that he used to provide a factual case for how ownership of stocks is broken up amongst our population.

The amount of wealth held by the bottom 50% of households is now at an all-time high. This number is up ninefold since bottoming out in 2011 following the devastation caused by the Great Financial Crisis.

Bloomberg’s Justin Fox says there are three main drivers of this increase:

So that’s three drivers: (1) recovery from the housing bust, (2) late-cycle wage gains that probably got a boost from deficit spending and minimum-wage hikes and (3) checks from Washington.

You would think the sheer amount of spending from the government, along with pent-up demand, higher economic growth and the potential for wage growth will juice this number even higher in the years ahead.

The biggest gains in this time went to the top 1%:

The share of wealth held by the top 1% has gone from 23% in 1989 to more than 31% today. There are many reasons for this wealth gap — bad policy, globalization, technological change, etc. But one of the biggest reasons is because wealthy people hold the financial assets. And financial assets have done well over the past few decades. 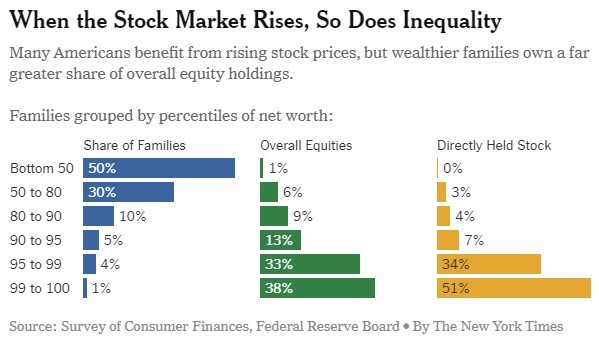 This is one of the reasons wealth inequality was made even worse by the pandemic. The stock market crashed but recovered very quickly while many people on the low end of the wealth spectrum lost their jobs.

While these numbers show how top-heavy the market is in terms of ownership, things are improving here as well. Here’s some more good news from the Investment Company Institute: 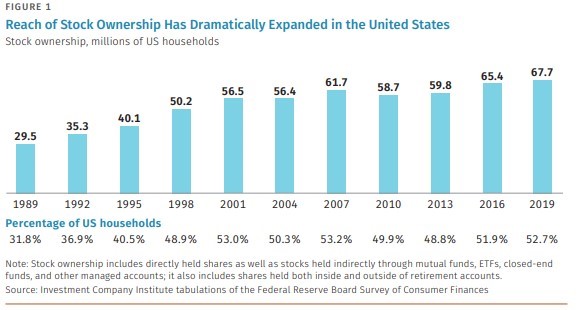 In 1989, less than 32% of households owned stocks in some capacity. That number is now closer to 53%. Granted, that number is basically the same as it was in 2001 but there has been an uptick in recent years following a dip after the financial crisis.

Now here are the changes in equity ownership from 1989 to 2019 by income quintiles: 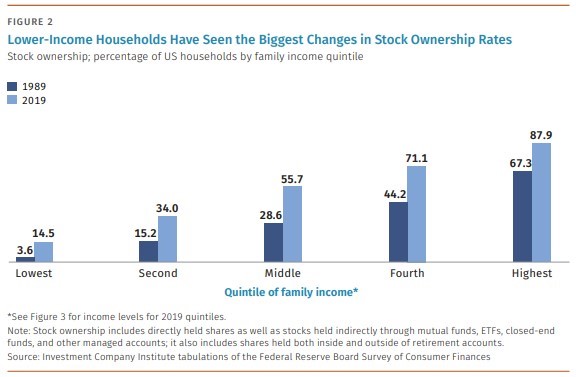 The lowest income group saw the biggest change over this 30-year period. Obviously, the percentage of households in the lower and middle classes is still far too low.

There are a number of different policy prescriptions being thrown around to decrease the wealth inequality in our country. Some people want to tax the rich more. Others would prefer we help out the lower classes by raising the minimum wage or offering more government assistance. 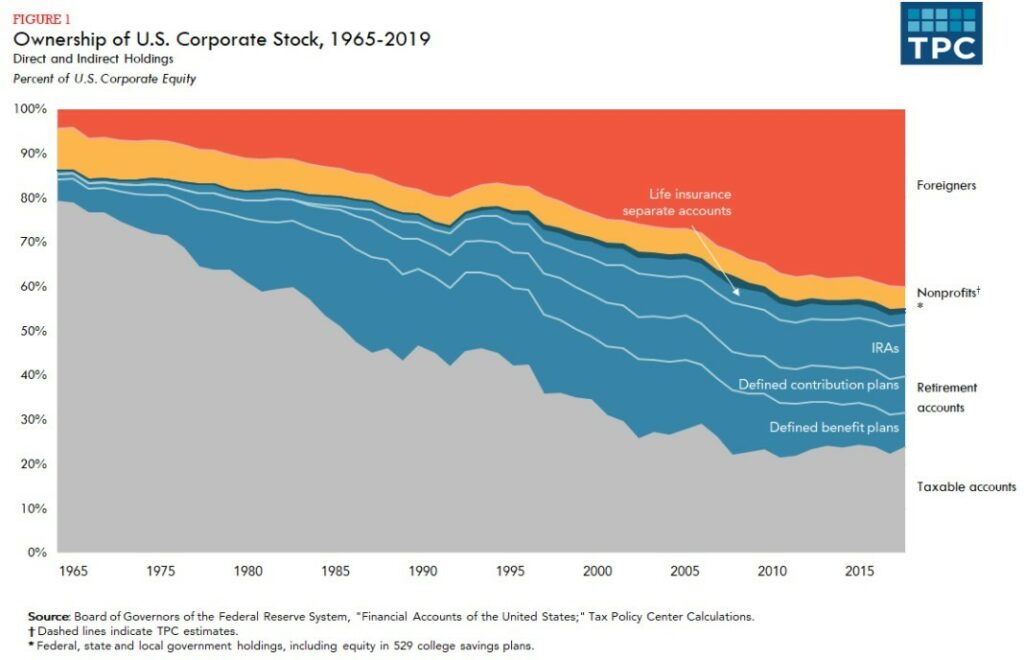 Taxable accounts used to make up nearly 80% of stock market ownership in the 1960s. Now the biggest holders of stocks in the United States are foreigners, IRAs, pensions and 401(k) plans. So not only do wealthy people own more stocks than the rest of the population, but they increasingly hold them in tax-advantaged accounts.

Some might look at this data and suggest we need to somehow tax these assets. That’s not my conclusion.

I would love to see the government incentivize more people to get involved with the stock market, especially those in the lower wealth brackets.

·         Default every worker in America into a target-date retirement fund when they receive their first paycheck (and make it an opt-out plan)?

·         Offer higher tax breaks for people who save for retirement under certain income thresholds?

Banning stock buybacks is not going to help reduce inequality. Instead of demonizing the stock market, more politicians should be figuring out ways to get more people invested in it to take advantage of the ever-growing profits and dividends paid out by corporations.

Stock market ownership trends are slowly but surely heading in the right direction. We should encourage more people to take part in the stock market to keep it going.